New Study Looks at How the “Blob” Came Back

Satellite measurements of sea-surface temperatures during the "Blob 2.0" warming event. View embedded image below for details.


Weakened wind patterns likely spurred the wave of extreme ocean heat that swept the North Pacific Ocean last summer, according to new research led by researchers at the University of Colorado Boulder and Scripps Institution of Oceanography at UC San Diego.

The study, “Physical drivers of the summer 2019 North Pacific marine heatwave,” was published April 20 in Nature Communications. Lead author Dillon Amaya conducted the research while a postdoctoral researcher at Scripps Oceanography, where he also obtained a PhD.

“Most large marine heat waves have historically occurred in the winter,” said Amaya, now a postdoctoral visiting fellow at CIRES, a partnership of NOAA and the University of Colorado Boulder. “This was the first summertime marine heat wave in the last five years—and it’s also the hottest: a record high ocean temperature for the last 40 years.”

And that wasn’t the only record: 2019 also saw the weakest North Pacific atmospheric circulation patterns in at least the last 40 years. "This was truly a 99th-percentile type of event, with impacts like slow winds felt around the North Pacific,” Amaya said.

To search for physical processes that might have influenced the formation of Blob 2.0 in summertime, the team paired real world sea-surface temperature data with an atmospheric model and tested the impacts of various possible drivers. 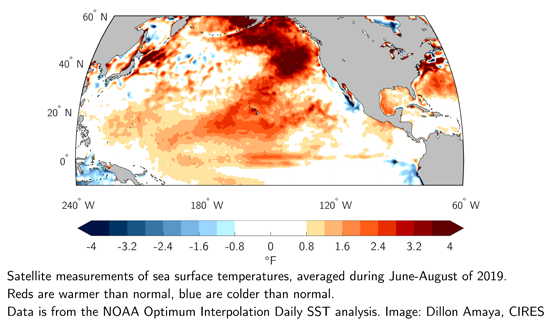 Researchers found weaker winds to be the most likely culprit for the record-breaking marine heat wave. When circulation patterns weaken, so does wind. With less wind blowing over the ocean’s surface, there is less evaporation and less cooling; the process is similar to wind cooling off human skin by evaporating sweat. In 2019, it was as if the ocean was stuck on a hot summer day with no wind to cool it down.

A thinning of the ocean’s mixed layer, the depth where surface ocean properties are evenly distributed, also fueled Blob 2.0, the researchers found. The thinner the mixed layer, the faster it warms from incoming sunlight and weakened winds.  The impacts can keep accumulating in a vicious cycle: the lower atmosphere above the ocean responds to warmer water by burning off low clouds, which leaves the ocean more exposed to sunlight, which warms the ocean more, and burns off even more clouds.

Warm ocean temperatures have the potential to devastate marine ecosystems along the U.S. West Coast. During warmer months, marine plants and animals with a low heat tolerance are at higher risk than during the winter—heating already warm surface waters can be more harmful than warming colder waters.

“Although this warming does not hit during the important ‘spring bloom,’ it can potentially reduce the quality of food that many open-ocean and migratory species, like seabirds, turtles, and fish, rely on for growth and development as they forage over great distances off the North Pacific in the summer and fall periods,” said Art Miller, research oceanographer at Scripps and a study co-author.

With the changing climate, we may see more harmful impacts like this in years to come, the authors reported. As global warming continues, heat extremes like last summer’s Blob 2.0 are becoming increasingly likely.

“It’s the same argument that can be made for heat waves on land,” said Amaya. “Global warming shifts the entire range of possibilities towards warmer events. The Blob 2.0 is just the beginning. In fact, events like this may not even be considered ‘extreme’ in the future.”

Some other studies have suggested that under global warming conditions the subtropical ocean-atmosphere feedback that drives this type of summertime extreme ocean temperature in the midlatitudes will occur more frequently and with higher intensity, said Miller.

The researchers hope these results will help scientists and decision makers better predict and prepare for future marine heat waves. “If we understand the mechanisms that drove this summertime event and how it influenced marine systems,” Amaya said, “we can better recognize the early warning signs in the future and better predict how heat waves interact with the coast, how long they last and how destructive they might be.”

In addition to Amaya and Miller, study authors are Shang-Ping Xie at Scripps Oceanography and Yu Kosaka at the University of Tokyo.

This research was supported by a National Science Foundation Graduate Research Fellowship, the National Science Foundation, NOAA, the Japan Society for the Promotion of Science, the Japan Science and Technology Agency through Belmont Forum CRA InterDec, and the Japan Ministry of Education, Culture, Sports, Science and Technology through the Integrated Research Program for Advancing Climate Models.

About Scripps Oceanography
Scripps Institution of Oceanography at the University of California San Diego, is one of the oldest, largest, and most important centers for global science research and education in the world. Now in its second century of discovery, the scientific scope of the institution has grown to include biological, physical, chemical, geological, geophysical, and atmospheric studies of the earth as a system. Hundreds of research programs covering a wide range of scientific areas are under way today on every continent and in every ocean. The institution has a staff of more than 1,400 and annual expenditures of approximately $195 million from federal, state, and private sources. Scripps operates oceanographic research vessels recognized worldwide for their outstanding capabilities. Equipped with innovative instruments for ocean exploration, these ships constitute mobile laboratories and observatories that serve students and researchers from institutions throughout the world. Birch Aquarium at Scripps serves as the interpretive center of the institution and showcases Scripps research and a diverse array of marine life through exhibits and programming for more than 430,000 visitors each year. Learn more at scripps.ucsd.edu and follow us at Facebook, Twitter, and Instagram.

About UC San Diego
At the University of California San Diego, we embrace a culture of exploration and experimentation. Established in 1960, UC San Diego has been shaped by exceptional scholars who aren’t afraid to look deeper, challenge expectations and redefine conventional wisdom. As one of the top 15 research universities in the world, we are driving innovation and change to advance society, propel economic growth and make our world a better place. Learn more at www.ucsd.edu.