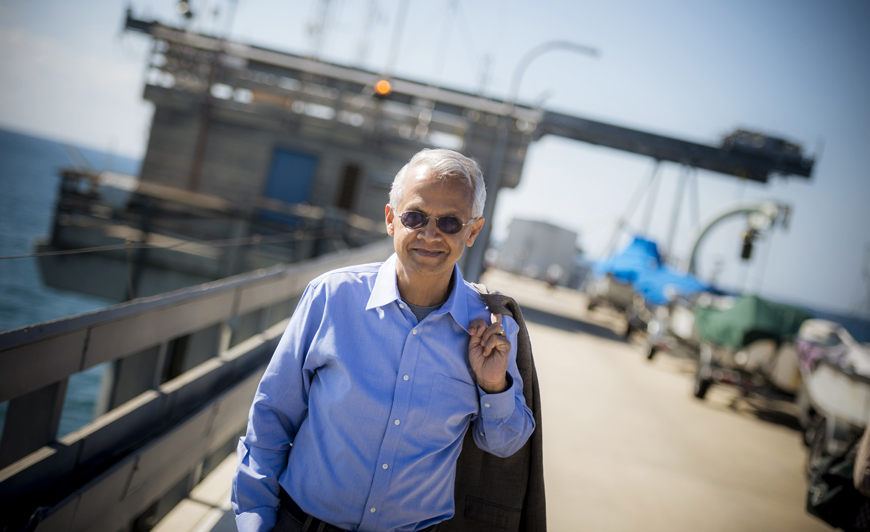 
Renowned climate and atmospheric scientist Veerabhadran Ramanathan of Scripps Institution of Oceanography at UC San Diego has been named the inaugural holder of the Edward A. Frieman Presidential Chair in Climate Sustainability.

This endowed faculty chair honors the legacy of Edward A. Frieman, a physicist who was deeply dedicated to using science to make the world a better place throughout his long career in top-level leadership in government, industry, and academia. During his tenure as the eighth director of Scripps Oceanography from 1986 to 1996, Frieman transformed the institution by broadening and strengthening its capacities in earth, ocean, and atmospheric science.

Frieman expanded and diversified Scripps’ external financial support and recruited premier scientists to join the faculty. He also enlarged the graduate program and facilitated greater integration with the intellectual strength of other opportunities at UC San Diego.

To honor Ed Frieman’s legacy, Scripps, along with support from Frieman family members and friends, established the Edward A. Frieman Endowment Suite. The endowment pays tribute to Frieman – who died in 2013 at the age of 87 – and his outstanding contributions as a renowned figure in American science and his commitment to climate sustainability.

The endowment includes a presidential chair to support a professor of climate science and sustainability and fellowships for a postdoctoral scholar and a graduate student. These three components – an endowed chair, endowed postdoctoral fellowship, and endowed graduate fellowship – constitute an enduring and powerful combination to further the important pursuit of climate sustainability.

“The Frieman family is delighted that Veerabhadran Ramanathan, ‘Ram,’ as we know him, has been named to this important chair at Scripps,” said a statement from Wendy and Joy Frieman, Ed Frieman’s daughter and wife, respectively. “His values are so well aligned with those embodied by Edward Frieman: pursuit of the highest level of scientific achievement and knowledge as a good in and of itself, combined with the application of knowledge to making this world better, more just, and more sustainable for all.” 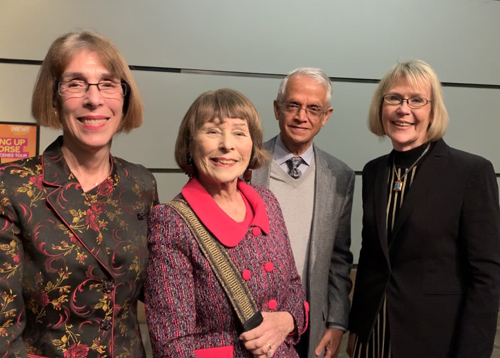 Ramanathan is a distinguished professor of atmospheric and climate sciences who joined Scripps in 1990. He has pioneered research on sources of planetary greenhouse warming including refrigerants, chemical compounds widely used in industry, and black carbon aerosols such as soot. In recent years, he has turned his focus to areas beyond research, engaging civic and spiritual leaders to frame climate change in social justice terms. He was named to the Pontifical Academy of Sciences by Pope John Paul II in 2004 and was honored as the science advisor to Pope Francis’ Holy See delegation to the historic 2015 Paris climate summit. His career is now devoted to breaking down the barriers between climate science and religion.

Ramanathan said he has two goals for the chair as its inaugural holder. He plans to pursue the science of extreme climate to be able to present a sense of what could happen in the next 40 to 50 years if the threshold for catastrophic anthropogenic interference in natural processes is breached. In terms of advancing solutions, Ramanathan hopes to expand the suite of education offered by the Bending the Curve undergraduate course. He proposes to work with faith-based organizations to create a version of the course tailored to people who have trouble accepting climate change science.

“This is a fantastic opportunity for Scripps Oceanography to be a global leader in creating solutions,” Ramanathan said. “This chair is going to give an opportunity not just to me but to future holders to help Scripps contribute further to society in terms of solutions.”

With a nearly completed goal of raising $5 million to fully fund the endowment, these positions have the potential for path-forging research with far-reaching impact, at various levels and for years to come, enabling Frieman’s voice and legacy to continue to address the greatest challenge for our planet.

The endowed graduate fellowship and endowed presidential chair have been fully funded, and the Edward A. Frieman Endowed Postdoctoral Fellowship is on its way to complete funding and will ideally be completed in 2020. Additional philanthropic contributions to this endowment can be made by contacting Katarina Trojnar, Senior Director of Development at Scripps, at ktrojnar@ucsd.edu or 858-534-1966.

About Scripps Oceanography
Scripps Institution of Oceanography at the University of California San Diego, is one of the oldest, largest, and most important centers for global science research and education in the world. Now in its second century of discovery, the scientific scope of the institution has grown to include biological, physical, chemical, geological, geophysical, and atmospheric studies of the earth as a system. Hundreds of research programs covering a wide range of scientific areas are under way today on every continent and in every ocean. The institution has a staff of more than 1,400 and annual expenditures of approximately $195 million from federal, state, and private sources. Scripps operates oceanographic research vessels recognized worldwide for their outstanding capabilities. Equipped with innovative instruments for ocean exploration, these ships constitute mobile laboratories and observatories that serve students and researchers from institutions throughout the world. Birch Aquarium at Scripps serves as the interpretive center of the institution and showcases Scripps research and a diverse array of marine life through exhibits and programming for more than 430,000 visitors each year. Learn more at scripps.ucsd.edu and follow us at Facebook, Twitter, and Instagram.

About UC San Diego
At the University of California San Diego, we embrace a culture of exploration and experimentation. Established in 1960, UC San Diego has been shaped by exceptional scholars who aren’t afraid to look deeper, challenge expectations and redefine conventional wisdom. As one of the top 15 research universities in the world, we are driving innovation and change to advance society, propel economic growth and make our world a better place. Learn more at www.ucsd.edu.